Little did I know about the place while I thought of embarking a solo trip to Tenkasi over a weekend. The core factor that made me choose the destination was that I can travel all the way in a KSRTC Interstate. A few images of the place that stayed in mind right from my initial Flickr days added fuel to it.

As they say and most of you know, traveling solo has got its own advantages. I can only connect with a few of them though. One among them is connecting more with yourself along with connecting to locals as well as strangers. Also, the realization that Tenkasi is only a 5 hour journey in KSRTC affirmed my plan.

After a bit of Google-ing, I decided to make it a point to visit the famous Kasi Vishwanathar Temple and stay somewhere near.

I intended to catch the Cherthala – Punalur FP and board either a KSRTC or TNSTC to Tenkasi after breakfast. But turned out, I missed the bus by 10 minutes. Well, blame my lazy ass.

The only option I was left with was to get a bus to Kollam and get another one to Tenkasi – that’ll slightly be more time consuming than the initially planned route, but as I mentioned, I was left with no other option.

I reached Kollam bus stand by 10:00, had breakfast, and as planned while on my way, boarded the Kollam – Thirunelveli FP. Even though the scheduled departure was at 10:45, we got started 15 minutes early – I can’t figure out why such a reliable mode of transport fail in adhering to timings.

Since it’s been a while I’ve had this trip and I forgot to note down timings and things as such, I don’t remember where we stopped for lunch. But as far as I can remember, the time was around 13:00 and we had passed Punalur by then. On the way, we passed by the famous Thenmala Ecotourism area and Punalur – Sengottai Meter Gauge Railway Bridge which is also known as 13 Kannara Bridge – the 13 arches gave its name.

We passed the Kerala – Tamilnadu border and somewhere in between all these, it started raining . Rain drops splashed onto my face after hitting the rear view mirror on the left side but I refused closing the shutter. The outskirts of Tenkasi looked picturesque. We moved towards the interiors through a well tarred road with paddy fields on both sides.

It was 14:00. I got down at Tenkasi bus stand and decided to go in search for a budget place to stay before having lunch. Since the only plan I had was to visit the famous Kasi Vishwanathar Temple, I thought of getting a room somewhere in close proximity. I reached at a railway overbridge that was built across the Tenkasi Railway Station. The top portion of the Temple Gopuram was visible from there. With the help of Google Maps, I lead myself further.

The receptionist at the hotel I first approached gave me a interrogative look and asked the purpose of my visit. Upon knowing that I was there just for a weekend/Temple visit, he refused to hire me a room. I walked further towards the temple and reached at an old lodge that stood right opposite to the Tenkasi Private Bus Stand. I got a single room for Rs. 300/-. Even though the rent was much lower than I expected, the room was fairly clean and moreover, the bed was neatly put. Even the T.V worked like a charm – in fact, as far as I can remember, it was the best television I’d watched in the course of my trips till date!

It was past 14:30. I decided to skip lunch and took a nap. By 18:00, I had a shower and with the help of GMaps, walked towards the Temple Gopuram to get a couple of long exposure shots just after the Sunset. But by the time I reached, it was late and contrary to what I conceived, the sky was almost dark. I mounted my camera on the tripod and gave a few tries. Even though the outcome differed from what I had in mind, I was kinda happy with it.

The Gopuram premises was crowded with devotees, families and even drunkards. The milieu seemed as if it’s a weekend/evening hang out hub for the natives. People who passed by had curious looks on their faces upon seeing me with a remote in hand, standing alongside a camera mounted on the tripod. Some kids even leaned up to the lens to have a sneak peek of what’s going on. Bracing my camera gear from them, I shot pictures until the sky went pitch dark. 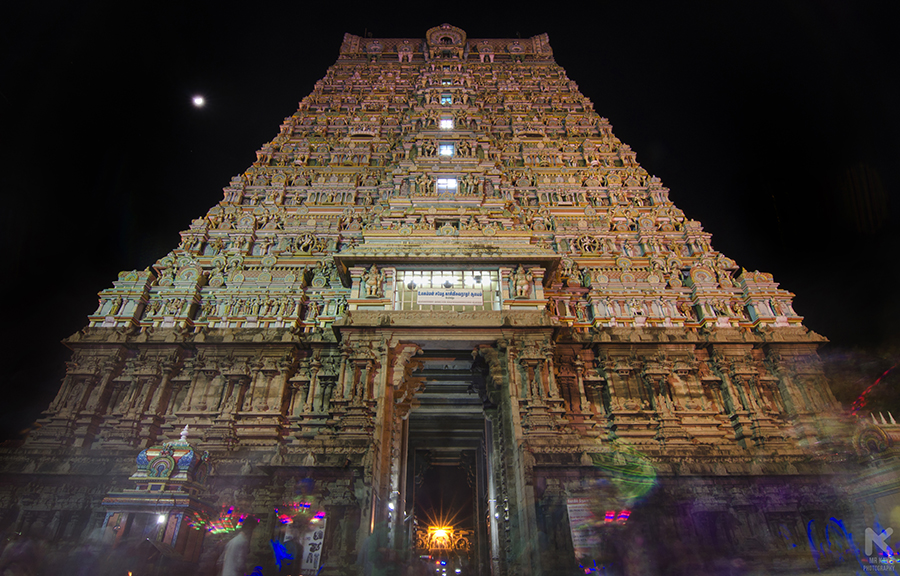 As the temple had restrictions for using camera, I couldn’t enter its premises. So the next day morning, I went there again, sans my camera gear.

A place that looked crowded with people the previous day looked so empty then. The weather was good but there was heavy wind that for once, as I stood praying, it made me lose my balance for a bit – well, I’m pretty thin, so maybe that’s the reason – heh!

As I entered Temple premises, the guard inquired for my whereabouts and asked to not take selfies. Other than a group doing Yoga and less than five devotees, no one else were seen around.

I randomly checked for my return bus in Aanavandi App. Upon knowing that there is a direct bus at 7:20, the idea of getting back home much earlier than I planned hit my mind. I fastened my steps, got out from the temple and walked to the lodge. Post checking out, I rushed to hire an auto to the bus stand.

We set out by 7:30 and rode through the beautiful green outskirts of Tenkasi to reach my hometown right on time.

The World Ways came into being through The Munnar Ways which happened during last year’s Ramadan. So

The mind started feeling restless and I couldn’t really figure out why. The only remedy

One thought on “The Tenkasi Ways”